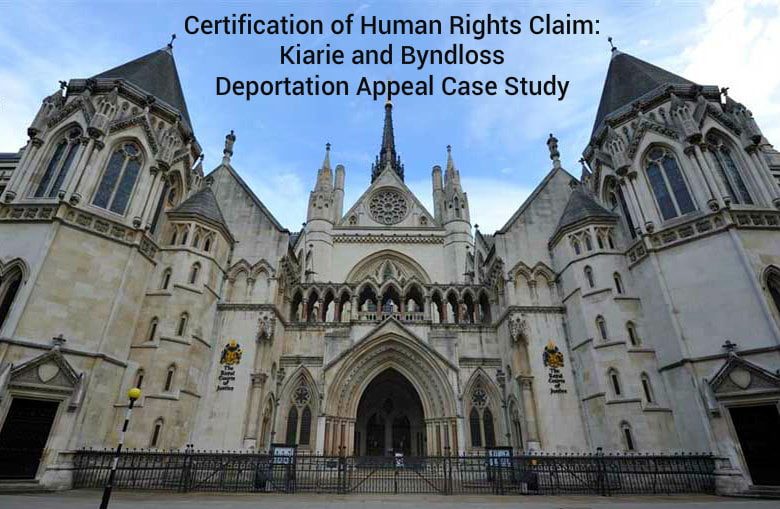 The Supreme Court ruling in the cases of R (Kiarie and Byndloss) v Secretary of State for the Home Department [2017] UKSC 42 focus on the issue of out-of-country appeals. Whilst both appellants were liable for deportation due to their criminal activity in the UK, it was held that the certification of human rights claim of the two appellants were based on a ‘legal misdirection’ as the Secretary of State had failed to recognise the potential interference with their Article 8 ECHR rights if they were to be deported.

Background of Kiarie and Byndloss

Mr Kiarie is a Kenyan national who came to the UK with his family aged 3 and had been settled in the UK since 2004. Mr Byndloss, of Jamaican nationality, had been settled in the UK since the age of 21 and had a wife and 8 children here. Mr Kiarie and Mr Byndloss (“the appellants”) both received deportation orders because of their convictions for drug offences in the UK. The Secretary of State rejected claims that deporting the appellants would breach their right to respect to private and family life under Article 8 ECHR. The Secretary of State exercised her powers of certification which meant that the appellants were given an out-of-country right of appeal. This is because it is against public good to allow foreign criminals to remain in the UK; however the certification of human rights claim should only occur in cases where there is no risk of serious and irreversible harm to the appellant.

Before an appeal can be considered, the appellant must prove some or all of the following compelling circumstances:

Judgment of Kiarie and Byndloss

There are procedural and substantive rights of the appellant that were considered. It was determined that the Secretary of State had not properly considered the appellants Article 8 ECHR rights when certifying their human rights claims. She claimed that the removal of the appellants pending their appeals would be “proportionate in all circumstances”, yet if the appellants were to be deported, it is obvious that there would be very significant obstacles as to the reintegration in their national countries and other compelling factors which are mentioned above.

In regard to the appellants procedural rights, the Secretary of State said that if necessary, the appellants could give evidence during their appeals via video link to the court and provide a written statement if they were to make their appeals out of country. However, the cost and arrangement of the projection and audio equipment for the hearing would fall to the appellant, which can be seen as disproportionate.

Taking into account these considerations, the Court allowed the appellant’s appeals and the certification of human rights claim were quashed.

Successful Appeals against a Certification of Human Rights Claim